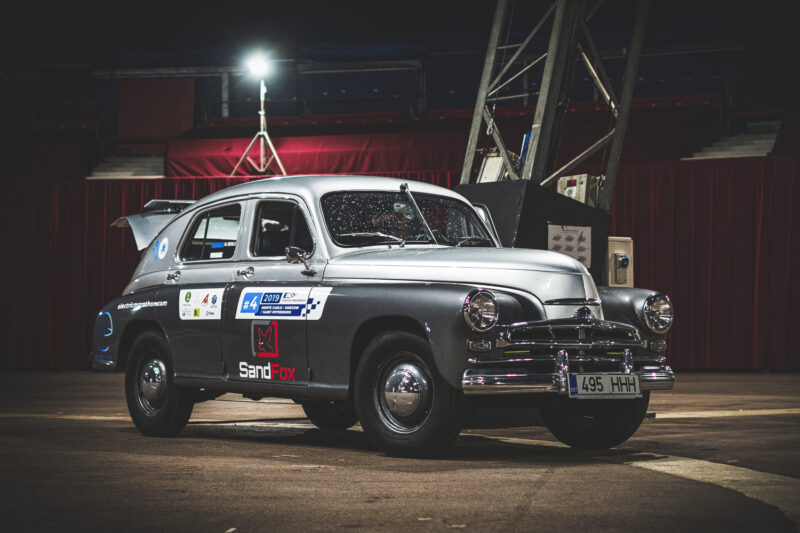 The modern Soviet dream car Pobeda has become quite rare on our street scene, but even rarer is the Pobeda, which is powered by electricity! This car is the reason for the birth of ZEV Garage.

Electric-Pobeda’s birth story begins at the end of 2004 when the groundwork started. The theoretical part lasted for half a year. It turned out that there is a lot of info about electric car construction, especially in the US, where a lot of such modifications have been made at that time.

Initially, there was a DC solution planned, but still, the AC system was installed. This was due to better efficiency, controllability of the braking process, better torque over a wide speed range and very importantly – the technical perfection of the available controllers. In addition, the AC motor is easier to cool down and the safety of the controller. While a failure in the DC controller may cause the entire battery voltage to go directly to the motor, the AC controller will generate a signal to the motor, and the motor will simply stop working if the controller fails. A calculated benefit was also the simpler possibilities for electric reverse gear.

At the beginning of the rebuild, it was necessary to clarify what could and should not be abandoned from conventional Pobeda. The biggest space gain came from removing the internal combustion engine with the radiator. Because a small electric motor does not need such a big radiator as a gasoline engine, it was replaced by a smaller one. The need for a petrol tank also disappeared.

Batteries are the most critical parts of an electric car. Although there was plenty of free space under the hood after the internal combustion engine and radiator were removed, it was not possible to fit all the batteries in front of the car. The weight could not be all in front of the car and the batteries’ weight was 560 kg! Those had to be distributed evenly on the vehicle and some of the batteries were moved into the back. Thanks to this, the load on the front axle remained exactly the same after the rebuild.
Despite the half-tonne battery, the car itself is only about 100 kilograms heavier than a conventional Pobeda. The replacement of a 200kg engine with just 39kg of power has already been mentioned, and the big and heavy radiator has been replaced by a much more compact Volvo 440 (both engine and controller are water-cooled), but the radiator fan comes from Renault Twingo.

Significant reinforcement was made through the rear of the car. The original Pobeda suspension is solid but unfortunately soft. The rear axle was also replaced with part from Volga GAZ-24.
The core and part of the frame were also renewed – these jobs were done in the home environment. “Then we went on to Hüüru with Mati Leivategija, and they did all the paintwork,” Merilo recalls. This was followed by fixing the brakes, electrical connection, and programming of the electric components. The car started driving just after Midsummer.
Initially, the shaft load on the rear axle was the stumbling block at Estonian Road Administration. According to Meelis, their attitude was supportive throughout the whole process and the progress of the unique project was followed with interest. Also, there were no problems with frequent overhauls with too much power and workload – the electric motor has no cubic capacity and its only 17.5 kW!

Although the gears can, and at higher speeds must be shifted, there are only two pedals – just like a car with automatic transmission. True, there is no need for shifting at city speeds. Since the electric motor has sufficient torque even when moving from the spot, there is no clutch. To change gears, the driver needs to disable regenerative braking, disengage the accelerator pedal, and then shift gears as normally. Since the engine has no idle speed, the engine will rotate at the same speed as at the start of gear shifting, which will take slightly longer than using the clutch. The “bug” here is the fact that the synchronizers have to adjust the rotor speed to the speed of the shaft driving the gearbox, but the weight of the electric motor’s rotor is greater than the clutch basket.

To date, Pobeda has covered nearly 30,000 km with electricity only and has traveled most of the European countries with the Electric Marathon rally. One remarkable fact of this car is that in 2012 Prince Albert II of Monaco drove with it from Tallinn to Monaco.

In 2019 the team won the race from Monte Carlo to St. Petersburg in front of five Tesla Model S. It was a precision drive, which had to observe the real-time traffic in front of the “zero-car” during the 5000 km road trip.