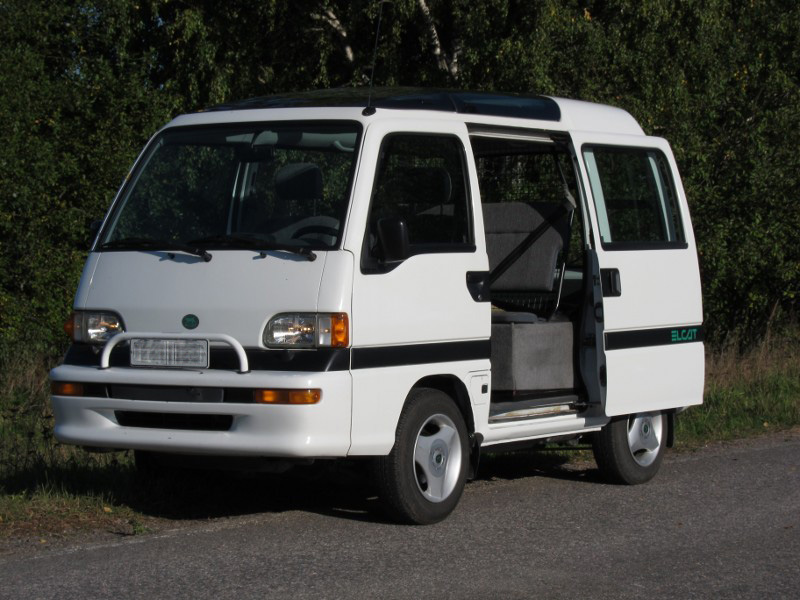 After the completion of the electric Pobeda and as the autumn progressed, there was a great need to continue driving the electric car also in winter. With Pobeda, it would have been quite difficult because the batteries were uninsulated, the cabin heating was weak, and the rebuilt body would probably have begun to rust after the first winter.
I didn’t want to start building a new one myself, and while surfing the internet, I came to three choices: Kewet, Citroen Electric, and Elca.

While the Kewet was funny looking, there was a relatively old model that was relatively expensive and also had uninsulated batteries, which would have kept winter trips too short. Although Citroen was really cheap but without batteries and it could not be checked before the purchase. The original batteries cost was over 200,000 EEK. The upgrade would not have been very difficult, but the car itself was relatively boring.

I also went to Finland to see the options there and somehow we got to place as in a picture.

By now that office is already closed up and Elcat’s have already either been sold or given to a local maintenance company for a replacement. The final choice was then with Elcat and the car itself is well suited to winter conditions.

At the agreement of the purchase price of the car arrived in mid-November. There, it became clear that Estonia needed a separate type of approval for this car. In a week it was clear that nothing was going to be happening without intervening. Though it was claimed that Subaru’s agent in Estonia, Mariine Auto, could not be reached by phone (Elcat is based on Subaru E12). Every once in awhile I harassed Estonian Road Administration and finally Elcat Finland sent them all the Finnish type approval papers. In the last days of November, I got a car that was registered to Estonia.

For some confusing reason, Estonian Road Administration also noted in my passport the dimensions of the tires, which do not comply with either Subaru’s or Elcat’s recommendations, probably based on the narrower winter tires.

Since the Elcat was sold without batteries, I was able to choose the batteries for which the Trojan TE-35 was suitable for its price and features. The batteries, by themselves, did well at first, the first 10,000 km passed without any problems.

Elcat has a charger developed in Finland that uses a temperature-controlled IUI cycle and is nice that virtually all parameters can be changed within a relatively large range. It can be used with 72V- 78V different capacities and different types of lead batteries, both liquid electrolyte, AGM and gel. All electronics (charger, controller, DC / DC converter, contactors and meter, and control controller) are housed in one box.

Since Elcat initially looked like a fridge of the seventies, we decided to make it look a little more normal. Mariine Auto also came to the rescue and the Elcat was painted in Ammeco Autos with Subaru Blue. The work was done very thoroughly and the car was quite dismantled.

The interior was designed by Andro Kööp, we chose the opposite color of blue, ie orange.

To get a little more detail on how much power Elca is consuming, we added the same DCC 4000 battery monitor as the Pobeda.

To save power, the Hella’s oblong daylight 2 x 6W lamps were added, replacing most of the lights that could be legally replaced with LEDs.

There was also a plan to install solar panels on the roof, but the high cost (over 20,000 EEK) and the relatively low efficiency, probably 3 to 4 extra kilometers a day, we’re not that important after all. In winter they would probably have reduced mileage due to increased air resistance.

Old batteries are likely to have such a bad thing that as the batteries become different, they will be charged differently. Less charged batteries will drop earlier, and as you continue to drive, some cans may be reset to zero, even upside down. The total voltage does not change much.
This kind of activity kills the battery in a short time. To avoid this, well-known electronics have built a small metering device, which then alerts you with different colors of LEDs, and when some battery voltage drops below the limit, you can do something about it, such as recharging, adding acid, restoring, etc.

At present, the car has Hawker lift truck batteries, type 5PZB160E and it looks like in the picture below!